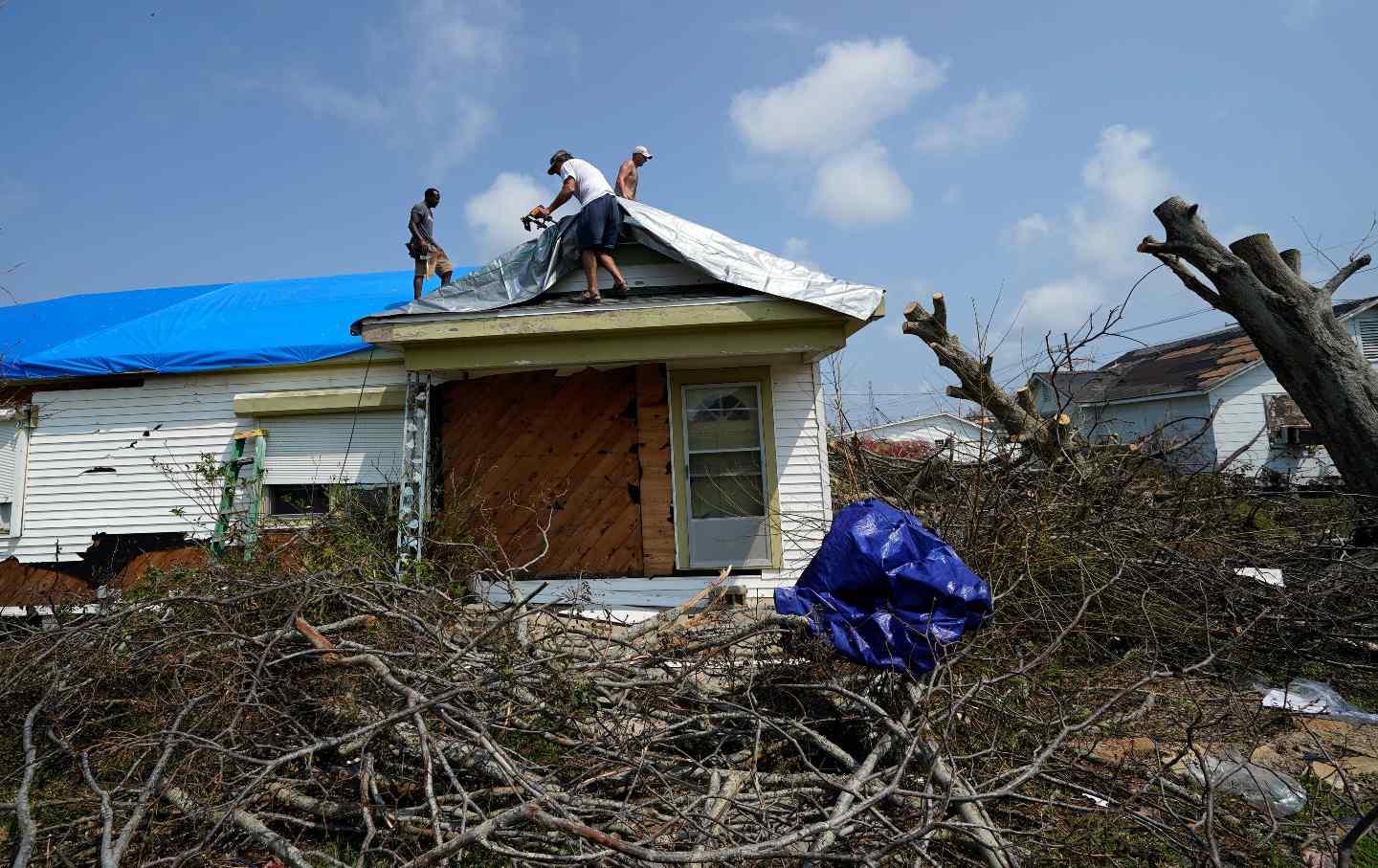 Trying to keep the roof down in Cancer Alley Louisiana

Thank you for registering for The nationweekly newsletter.

Thank you for signing up. For more than The nationsee our latest issue.

The nation is supported by readers: Donate $10 or more to help us keep writing about the issues that matter.

Did you know you can support The nation drinking wine?

It’s hurricane season. Here in Louisiana, we are preparing for another devastating storm. Predictions are that this year will be as brutal as 2005, when Katrina hit our shores. Here, tensions rise in late summer: Warm ocean waters driven by climate change can turn a Category 2 storm into a remarkably fast Category 3 or 4 storm with little warning. Last August, Hurricane Ida showed no mercy, ripping roofs off and displacing thousands of people. Six months later, I was still emptying houses.

I’m a climate organizer, and in the weeks since Ida, I threw myself into hurricane relief. Like Katrina, Ida brought to light decades of systemic injustice and displaced entire communities. Even before the hurricane, the people I work with in southern Louisiana were at risk of displacement due to the expansion of fossil fuels. After the storm passed, I worked as hard as I could to help them get home. Our Louisiana Just Recovery Network has deployed hundreds of volunteers; we spent months cleaning water-damaged homes and fixing tarps over broken roofs to keep the rain out.

I learned to tarp roofs in Romeville, a historically black town 60 miles upriver from New Orleans in St. James Parish. Residents had never seen a storm like Ida, but environmental issues have long been on their minds. Romeville is located in Cancer Alley, the stretch from Baton Rouge to New Orleans with over 150 chemical plants, refineries, and industrial facilities. The region is home to seven of the 10 census tracts with the highest cancer risk in the country, and black communities are disproportionately exposed to pollutants.

That day in Romeville we had knocked down a few roofs and were trying to finish before sunset. The power grid remained cut off for weeks, so every night went dark by 8 p.m. As I gathered my tools, I saw an entire town light up through the sugarcane field on the outskirts of Romeville. It was Nucor, one of twelve industrial facilities in St. James. As big as a public square, Nucor ran on huge backup generators. Before Ida, we learned that Nucor had spent half a decade violating its air permits by releasing poisonous sulfur gas.

“They’ve been poisoning us for six years,” Barbara Washington told me that night. She is a co-founder of Inclusive Louisiana and can see Nucor from her backyard. “Think of how we feel watching these plants light up as we sit here in the dark.”

His words laid bare a fact of life in Louisiana. As the third-largest energy producer in the United States, we are on the front lines of fossil fuel extraction and petrochemical manufacturing, while facing the first and worst consequences of those same industries. Hit by four major hurricanes in the past two years, we are losing land faster than anywhere in North America, even as companies plan massive construction of gas plants and pipelines on our fragile coast. The unchecked expansion of fossil fuels poses an urgent threat to Louisianans like Washington, while industrial development threatens to drive communities off their land. But resistance from the front lines has sparked a grassroots climate movement of remarkable persistence.

In 2018, Sharon Lavigne formed RISE St. James to fight industrial pollution in her community. The organization is now working to stop Formosa Plastics from building one of the largest petrochemical complexes in the world just miles from an elementary school and Lavigne’s backyard.

“We have enough pollution,” Lavigne told me when we met two years ago. “We are dying.” She said state officials have allowed the industry to turn black rural areas into a zone of sacrifice. That day, she led us along the Mississippi River, noting plant after plant. “St. James is full.

I have worked with RISE knocking on doors, making calls and distributing flyers. We gathered and walked. RISE organized the June 19 celebrations and distributed hams for Christmas. Under Lavigne’s leadership, an international movement united to repeatedly delay Formosa Plastics. Recently, the US Army Corps of Engineers commissioned an environmental impact statement for the project. It could take three years, long enough to stop Formosa for good.

Forty minutes south of New Orleans, Ironton earned its own victory last year. The historically black settlement of Plaquemines Parish successfully countered a plan by Tallgrass Energy to build an oil terminal at the former St. Rosalie Plantation nearby. Ironton elders had long spoken of burial sites at Sainte Rosalie. Some have buried their ancestors there. Tallgrass plans said they would build the oil terminal above the graves, so we made arrangements. Months later, Tallgrass canceled the project.

By then, Ida had brought 10 feet of flood water to Ironton, destroying almost every house. Ironton never had the flood protection enjoyed by wealthier, whiter communities, and after the hurricane the local government offered little support. Residents had to rent heavy equipment and clear their streets, paying out of pocket to demolish their own homes. I organized volunteers to empty the church.

In St. James, authorities have also been slow to help black communities recover. I wondered if the lack of help had something to do with the proposals for new industrial facilities nearby. In 2014, the government of St. James rezoned swaths of predominantly black neighborhoods as “industrial future.” From Romeville to Ironton, people see an attempt to displace residents and make room for industry. As Cassandra Wilson of Ironton told me, “They basically want to chase you with these plants.”

Many may not understand why black Louisianans intend to rebuild in an area so vulnerable to fossil fuel development and escalating storms. For some, ever-increasing housing costs create significant barriers to relocation. But land ownership also represents generational wealth, with strong historical and emotional significance in the American South, where black land theft has been prominent.

Barbara Washington told me that her ancestor bought 34 acres near Romeville after slavery was abolished. “This land is still in my family,” she said. “Our ancestors worked the land, then became owners. We were here before the industry. It is our right to keep what we have. In St. James Parish, the revelation that Formosa Plastics would build on a slave graveyard was a major mobilizing tool: Across the South, black descendants see protecting these graveyards as an investment in future of their communities. They are assisted by Louisiana law which guarantees them access to these sites.

In February of this year, six months after Ida, I was still climbing ladders. I had brought a small team to cover the house of Alexis Jones, an elderly resident of St. James. A sudden downpour left the roof slick with rain, so we went inside to see what we could salvage. Jones lived alone on a fixed income. Months passed before someone destroyed his house. We set about cleaning up the debris until water flooded us through the holes in his roof.

I took off my wet helmet and gloves, sitting on a pile of rotting drywall, my head in my hands. With little funding, our volunteers had worked on over 120 homes for free, but I knew there were thousands like Jones who had not been helped. We only had months before the next hurricane season, and I knew that no matter how hard we worked, only the government had the resources to deal with the consequences of the climate catastrophe. I knew that in the richest country in the world, despite 16 years of hard lessons since Katrina, our leaders still had no plan for these storms. And I knew that the buildup of fossil fuels on the Louisiana coast would bring hurricanes like Ida again and again.

I organized in Louisiana for years, but in the months after Ida I learned just how bad this climate crisis really was. That day, at Jones, I was furious, I was scared. On the way back, I cried bitter tears. But the next morning, I woke up thinking of Washington and Lavigne, dedicated grandmothers driven by love for the community, our rivers and bayous, and our unborn children. I am no longer waiting for politicians to find the will to get out of this crisis. I see organizers everywhere building a grassroots climate movement to fight for a better world.

Last June, I helped organize “Climate Justice and Joy”, the first climate festival in the Southern Gulf. A thousand people from all over the region were present. “Climate change may seem so abstract, but we have become experts through our own experience,” I said in my speech. “It has become part of everyday life, and we are all leaders in the fight. If we can come together despite our differences and begin to address this crisis, we have the power to break down all the systems of injustice that have brought us to this point. We closed the event with an hour of Bomba and Cajun dancing in two parts. I was not thinking of thunderstorms. Anger may lead us, but love of home sustains us. Finding joy in the midst of struggle is an act of resistance.

Dispatches from the front lines are stories straight from the leaders who are fighting – and winning – the battle for a fossil-free future. They are published by Equation Campaign in collaboration with The nation. Equation Campaign is a 10-year initiative that funds grassroots movements to keep fossil fuels in the ground. Read more dispatches here.