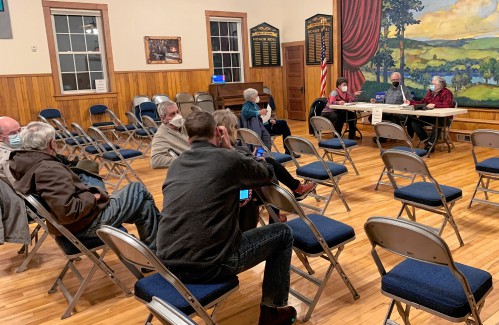 LEYDEN — The Selectboard discussed the return of city-owned equipment, regional policing and upcoming road construction at its Monday meeting.

In front of a crowd of approximately 25 attendees at City Hall, the council shared their plans for obtaining and selling exceptional municipal equipment. Some of the equipment is owned by Dan Galvis, the city’s director of emergency management and former police chief who retired in October after the Selectboard reviewed the racist content of emails he shared with city employees and officers between 2015 and 2016, an incident that Galvis said misrepresented him.

According to Selection Committee Chairman Bill Glabach, the value of $1.5 million assigned to the total inventory of assets, some of which have been sold and are not in the possession of Galvis, is inaccurate and does not not reflect the age or condition of the equipment. Other equipment, Glabach said, was “cannibalized” for spares.

Galvis, who was present at Monday’s meeting, said he had sold one or two military trailers and moved others to other cities, although he could not say where.

Galvis previously told the Greenfield Recorder that he was in the process of bringing the Humvees back to his property and had non-lethal weapons that are still in the packaging and never used. He also said he has at least seven generators, some of which can only be used for parts.

Reached by phone Wednesday, city worker Michele Giarusso said Galvis had made the weapons non-lethal at Monday’s meeting. She said the Humvees hadn’t been returned.

When pressed by residents at the meeting, council did not name the location of an uninsured 2019 trailer that has not been sold.

“Just because this material was free doesn’t mean it belongs to anyone other than the city of Leiden,” said finance committee chairwoman Ginger Robinson. Leyden received the equipment through the Law Enforcement Support Office (LESO) program, which transfers surplus military equipment to non-military law enforcement agencies.

The council decided to sell the surplus returned items on Municibid, an online auction site for government agencies.

“Hopefully we can put this behind us,” Glabach said.

Public Safety Advisory Committee Chair Elizabeth Kidder’s update to the council included a discussion of a potential agreement with Bernardston for shared policing.

Four regular officers and the state police are currently covering Leiden. The interim regional police would mean Leiden Police Station would become a substation for Bernardston. Leiden’s fleet of police cruisers would be handed over to Bernardston and auctioned off. Money from these sales would in turn support the upkeep of Bernardston’s current fleet.

“The state looks favorably on any kind of consolidation,” Glabach commented.

The proposed deal has yet to be signed by the two cities, according to Bernardston selection committee chairman Robert Raymond.

The Public Safety Advisory Committee has also applied for an Efficiency and Regionalization Grant that would allow the city to partner with the Edward J. Collins Jr. Center for Public Management at the University of Massachusetts Boston to conduct a study feasibility of public security services. The grant application was due February 10 and the committee expects to receive a response in early April.

Glabach and Kidder said they were delighted to work with Bernardston.

“We’re really going back to the original concept,” Glabach said, referring to the early 18th century “Fall Town” which included Leyden, Bernardston and part of Colrain. “We can’t do it on our own.”

“We will have a police department,” said Selectboard member Erica Jensen. “I think that’s the key.”

Each of the 22 trees slated for felling will have an audience, Brooks said, adding that he has already spoken to most of the residents whose trees are falling. Two utility poles will be relocated to allow drainage and move the road 2-3 feet west.

Although no paving will be done, approximately 2,000 yards of material will be used to stabilize and improve the existing road. No major elevation changes will be made.

“We didn’t think it would be a good idea to pave anything,” Glabach said.

Paving the roads would now deplete the city’s Chapter 90 funds, which are used for equipment and other projects.

Funding for the East Hill Road project will come from a Small Town Rural Assistance Program (STRAP) grant from the MassWorks Infrastructure Program. Brooks said the work will be complete by summer 2023.

Glabach said holding road repairs without repaving will serve as a model for future projects.