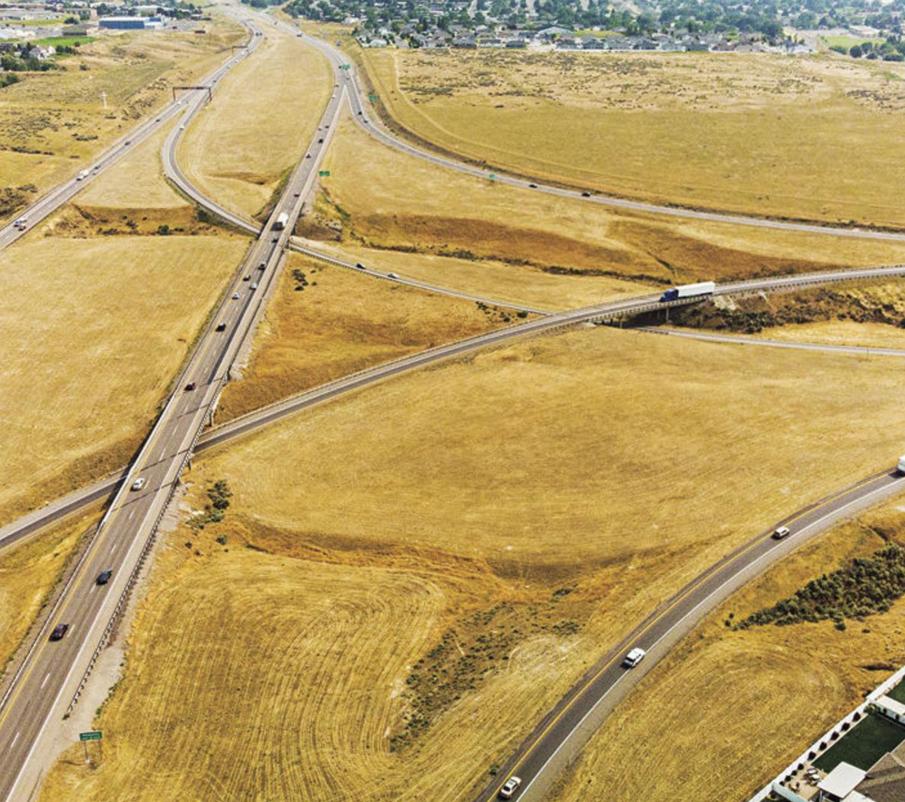 Approximately 900,000 ft3. yards. excavations will be completed. In addition, approximately 225,000 tons of basic materials will be transported; 111,000 tonnes of asphalt will be laid; and more than 6,500 cu. yards. of concrete will be poured. (Photo courtesy of Idaho Department of Transportation)

Preliminary work on the Idaho Department of Transportation’s project to reconstruct the I-86/I-15 system interchange has begun.

Originally built 60 years ago, the design needed updating to handle higher traffic volumes and to replace aging bridges that are nearing the end of their life. Sundt-Cannon joint venture contractors began moving equipment into the project area the week of July 10.

The scale of the effort is truly historic and has taken years to materialize. When completed, approximately 900,000 cu. yards. excavations will be completed. In addition, approximately 225,000 tons of basic materials will be transported; 111,000 tonnes of asphalt will be laid; and more than 6,500 cu. yards. of concrete will be poured. A total of 70,000 square feet of retaining walls will also be constructed throughout the project area. Finally, ITD teams will build eight new bridges. Four of them will use precast concrete beams and four will have steel beams. In all, almost 5,000,000 books. of steel will be used in the bridges. Teams will work year-round for approximately three years to complete the project.

The two most significant changes residents will see during construction are a detour for traffic traveling from northbound I-15 to westbound I-86 and the closure of the Chubbuck Road overpass.

In order to maintain traffic for the planned construction of the project, the ramp will need to be lowered prior to the start of bridge construction. This requires closing the ramp and detouring through the Northgate interchange. This work should be completed in early September.

The Chubbuck Road overpass will be closed around August 1, before the start of the school year, and will remain closed for the duration of the project. Construction will remove the existing bridge, dig new embankments, and create bridges for I-15 to pass over Chubbuck Road. The final design of Chubbuck Road will be easier and safer for motorists, cyclists and pedestrians to navigate. During construction, motorists will be diverted through the Northgate interchange.

Although demolition of the Chubbuck Road overpass will not begin immediately, a significant concern for the school district and other interested parties was the modification of bus routes and student driving routes after the start of the school year. . This could cause unnecessary delays and confusion for buses, teachers, parents and students.

The $112 million project to rebuild the system’s interchange is a massive undertaking that requires extensive coordination with many different parties. ITD has been in close contact with city leaders, ISP, Bannock County Sheriff’s Office, emergency response, schools, regional transit and others to ensure the safety of citizens and motorists of Idaho running through southeast Idaho.

An important question that some community members express is: why now?

“Aging bridges will continue to move closer and closer to the end of their lifespan,” said project co-director Greg Roberts, “They would still be functional, but weight limits would start to have to be imposed. to truck traffic. This would have a negative impact on the economic future of Pocatello.”

This is a significant concern for Idaho businesses. Large loads, called “mega-loads”, travel through Gate City into Montana and west to other parts of southern Idaho. Local manufacturing companies need to be able to get their products to their customers quickly and safely.

However, it is not just the age of the 1960s bridges that is of concern. When the System Interchange was built, there was almost no development on the east side of I-15. Today the Highlands area has housing estates, a high school, the fairgrounds and the wellness complex. Additionally, development at Northgate has begun and will bring even more traffic.

“We can only expect traffic volume to increase and with it congestion,” Roberts said. “This will cause the ‘weave’ to worsen between the Pocatello Creek on-ramp and the Chubbuck exit. -86.”

The problem for drivers now is finding a space to squeeze into so they can head west towards Chubbuck.

“It’s only going to get worse if we don’t do anything,” Johnson added, “The gaps between the cars will get smaller and smaller, making it harder to merge safely. Drivers will be forced to make changes more aggressive lane heading into Chubbuck. This kind of situation increases collisions. We don’t want to wait until things get dangerous and people get hurt.

Safety is a top concern for project managers and contractors as motorists prepare to drive through the job site.

“It’s our neighbors and our family who work there,” Roberts said. “We’re doing everything we can to make the work site safe, but it’s really important that drivers obey posted speed limits, watch for lane changes and signs, and leave room for other motorists on the road.”

Both Roberts and Johnson have witnessed serious construction accidents caused by inattentive drivers. In one case, a motorist followed a work truck directly to the site.

“It’s something that never leaves you,” Johnson said as he reflected on a passing on a previous project. “We do everything we can to keep people safe, but when it happens it’s hard not to take it personally. We just ask everyone to keep themselves, their families and neighbors safe while making the film. of this project.”

When completed, the new exchange system will be more secure and ready to carry the increased traffic volumes for the fastest growing US state.