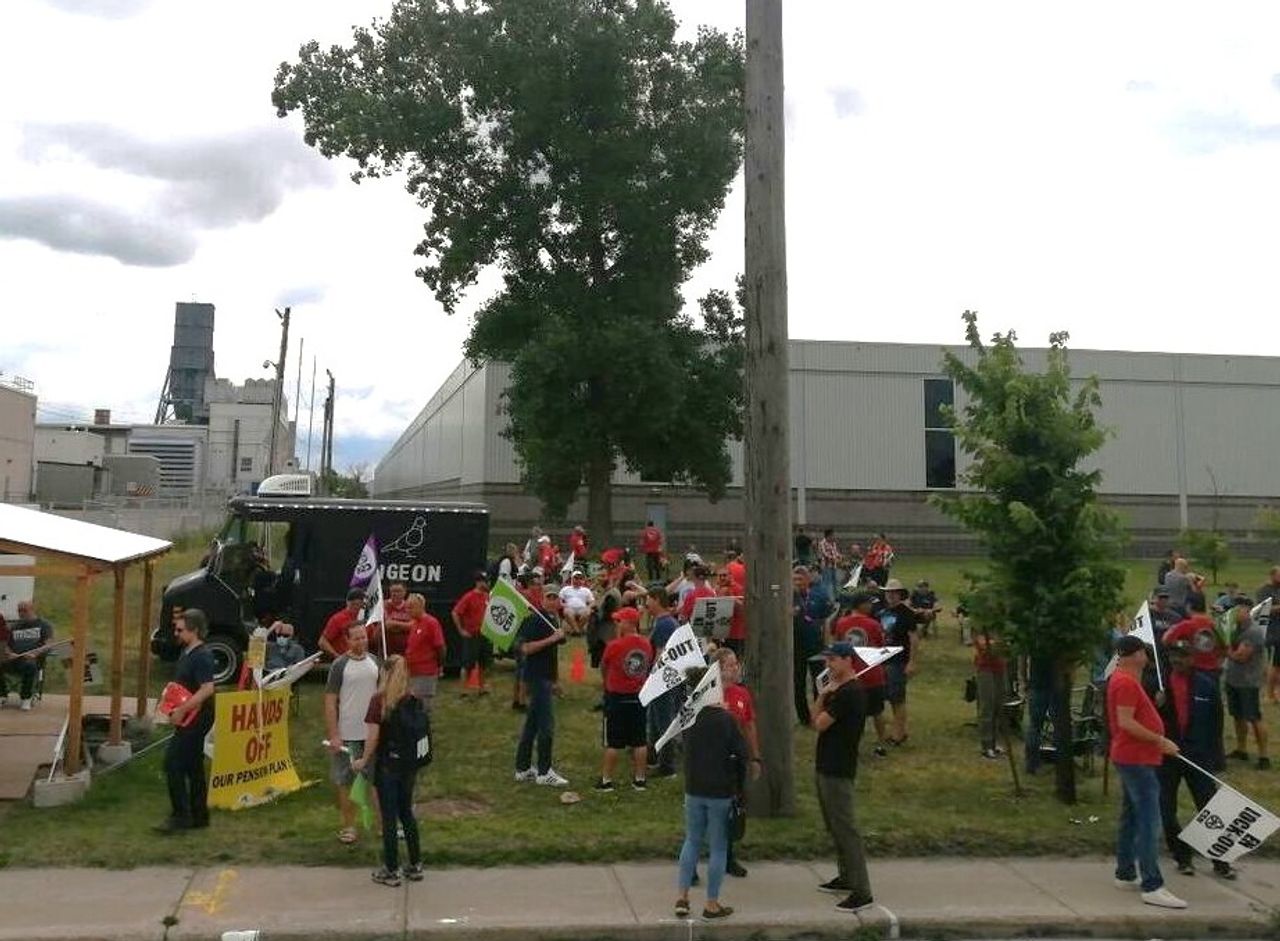 For more than five months, Rolls-Royce has locked out 530 machinists and other workers at its Montreal aircraft engine plant.

The company imposed the lockout on March 15, the same day workers voted 94% in favor of the strike.

Rolls-Royce is also withholding vacation pay, production bonuses and essential benefits. “They took away our bonuses, cut off our personal insurance, our life insurance, our dental insurance, they cut everything,” one worker told WSWS reporters during an Aug. 10 protest outside the factory.

On May 11, locked-out workers rejected a company contract offer with concessions by 95%. At the end of July, the Rolls-Royce Canada Workers Union (STTRRC), which is affiliated with the Confederation of National Trade Unions (CSN-Confederation of National Trade Unions), presented its members with a second equally rotten employer’s offer, which they rejected by 75%. The company is counting on the demoralization of the workers, whose struggle has been systematically isolated by the CSN, to impose large contractual concessions.

Rolls-Royce is a British multinational specializing in the manufacture of luxury cars and civil and military aircraft engines. In 2021, it had revenues of more than $13 billion, including $4 billion from military contracts with the United States for “the next few decades”. In Canada, Rolls-Royce has long-term partnerships with the federal government. This includes, through its Defense Aerospace branch, contracts with the Department of National Defense and the Royal Canadian Air Force.

A major issue in the dispute at the Montreal plant is the company’s insistence that the massive pension cuts it imposed, with the complicity of the unions, on employees hired after March 24, 2013, be extended to the entire workforce. It involves abolishing the defined benefit pension scheme and replacing it with a defined contribution scheme, thus transferring all the financial risk from the company to the workers.

Rolls-Royce workers told the WSWS that such a change could lead to losses of more than $125,000 per worker. The company also wants to impose a two-year wage freeze for the years 2020-2021, and wage increases below inflation in subsequent years.

Management’s intransigence is part of a corporate attack on workers in Canada and abroad. The pandemic has intensified this process as banks, the wealthy and corporations, including Rolls-Royce, have received billions of dollars in “bailouts” from federal and provincial governments. Workers told the WSWS that at the start of the pandemic, 70% of employee wages were paid by the federal government through its “wage subsidy” program. The ruling class, which has grown grotesquely rich as workers were sent back to work amid the pandemic, is now demanding an accelerated transfer of social wealth from the bottom up.

In their struggle, Rolls-Royce workers face not only a ruthless multinational corporation and its government supporters and defenders, but also the trade union apparatus, which functions as a corporate partner of management.

Led by well-paid bureaucrats who fully accept the company’s “right” to make profits on the backs of workers, the STTRRC and the CSN have done nothing to mobilize the 300,000 CSN members to stand up to alongside the locked-out Rolls-Royce workers, leaving the entire working class alone, which too enters into struggle and suffers the same assault on its living conditions.

The unions’ nationalist strategy is doomed in the face of the ability of a multinational like Rolls-Royce to move production where it wants, something the company has boasted of doing throughout the lockdown. “We have moved work to our global service network to ensure we can continue to provide the high level of support that our customers have come to expect,” Rolls-Royce spokesman Donald Campbell said.

An overview of the Rolls-Royce lockout and other recent labor struggles in the Montreal area shows that the unions are acting to demobilize their members and allow the concessions demanded by big business to be imposed. What union bureaucrats seek to preserve, first and foremost, is their “seat at the table” – their comfortable relationship with government and big business, as well as their six-figure incomes and privileges.

In a recent union raiding operation, Montreal Rolls-Royce workers switched union allegiance from the International Association of Machinists and Aerospace Workers (IAMAW), which has represented them for 66 years, to the CSN and its Manufacturing Industry Federation (CSN-FIM). The workers told the WSWS that senior leaders of the IAMAW, affiliated with the Quebec Federation of Labor (FTQ), were cronies of management who conspired against the workers. After the raid, the IAMAW walked away with the workers’ strike fund. But the CSN also has a long history of betraying workers’ struggles, including last year’s 4-month militant strike by poorly paid workers at the Olymel slaughterhouse in Vallée-Jonction.

Through his Fondaction investment funds, the CSN and its leaders receive money from shareholders and invest in private companies, among others. These investment funds, like the Fonds de solidarité FTQ, embody the corporatist relationship that the union apparatus has with big business and the state. Unions today play the role of an industrial police force bent on suppressing the class struggle and forcing concessions on workers to increase corporate profits.

In March, STTRRC president Frederic Labelle said he was ready to make key contractual concessions. Noting that employees already have ‘good wages’, he said he was ‘open’ to dropping the union’s demand for a 5% annual pay rise for five years – which would have already been a drop workers’ real wages, given that inflation was on the run and is now above 8 percent.

But Rolls-Royce workers have shown great combativeness, in what is part of a growing wave of labor struggles across Canada. In July, 48 strikes or lockouts involving more than 10,000 workers were underway in Quebec alone. Major conflicts have erupted across the province, notably at the Raglan mine in northern Quebec, the Agropur dairy in Granby and Molson-Coors in Montérégie. In each case, the stakes are the same: corporations are demanding major concessions from workers to boost their profits and satisfy their wealthy shareholders.

Instead of encouraging Rolls-Royce workers to unite their struggle with that of their class brothers and sisters, the CSN turns to the social forces that are at the root of workers’ exploitation.

It is in this spirit that the STTRRC organized a demonstration in front of the office of the provincial premier in Montreal to “explain” to Quebec Premier François Legault that his government is subsidizing a company that neglects its employees. As if Legault, himself a multimillionaire and former CEO of Air Transat, did not know! Continuing to sow illusions about Legault and his anti-worker government, Labelle added that he is “giving Legault a chance to correct the record” ahead of the provincial election this fall.

The Legault government of the CAQ (Coalition Avenir Québec) has a long history of intrusive interventions in labor disputes alongside big business. During the lockout at the Aluminerie de Bécancour (ABI) in 2018, Legault denounced wage levels in Quebec’s manufacturing sector as “too high”. Following the same austerity policies as previous Parti Québécois (PQ) and Liberal Party governments, the CAQ advocates social spending cuts, privatization of public services and tax cuts for big business and the wealthy , while promoting Quebec chauvinism. Last year, Legault threatened to use back-to-work legislation against public sector workers, before imposing concession contracts on more than half a million public sector workers, with the help of unions.

It is telling that STTRRC President Labelle is running himself as a candidate in the October 3 provincial election under the Parti Québécois banner. The PQ is a big business party that imposed the worst social cuts in the province’s history when it was in power in the late 1990s, and has since made an even sharper turn to the right and to chauvinism. anti immigrant.

Locked-out Rolls-Royce workers must reject the nationalist and pro-capitalist policies of the STTRRC and CSN which only serve to isolate and demobilize them. They must recognize that they have powerful allies: the tens of thousands of other Rolls-Royce workers around the world, and all workers in Quebec, Canada and internationally who are facing the same generalized assault against their living conditions and the ruling class’ “profits before lives” pandemic policy.

To make a strong appeal to other sections of the working class in a common struggle against the concessions imposed by the capitalist class, the workers of Rolls-Royce in Montreal must form their own rank-and-file committee, completely independent of the union bureaucracy.

A similar initiative has already been taken in Canada by education workers and CP Rail workers, who have established rank-and-file committees in association with the International Workers Alliance of Rank-and-File Committees (IWA-RFC ). This alliance, formed at the initiative of the World Socialist Website, is a network of rank-and-file committees being built on every continent to develop a working-class counteroffensive against transnational corporations and the pro-war, pro-austerity capitalist governments that serve them. It already involves workers in manufacturing, rail, the public sector and many other sectors on five continents.

By joining the IWA-RFC, Rolls-Royce workers will be able to have democratic discussions on the critical political issues that underpin their struggle, while coordinating their demands and actions with workers around the world.