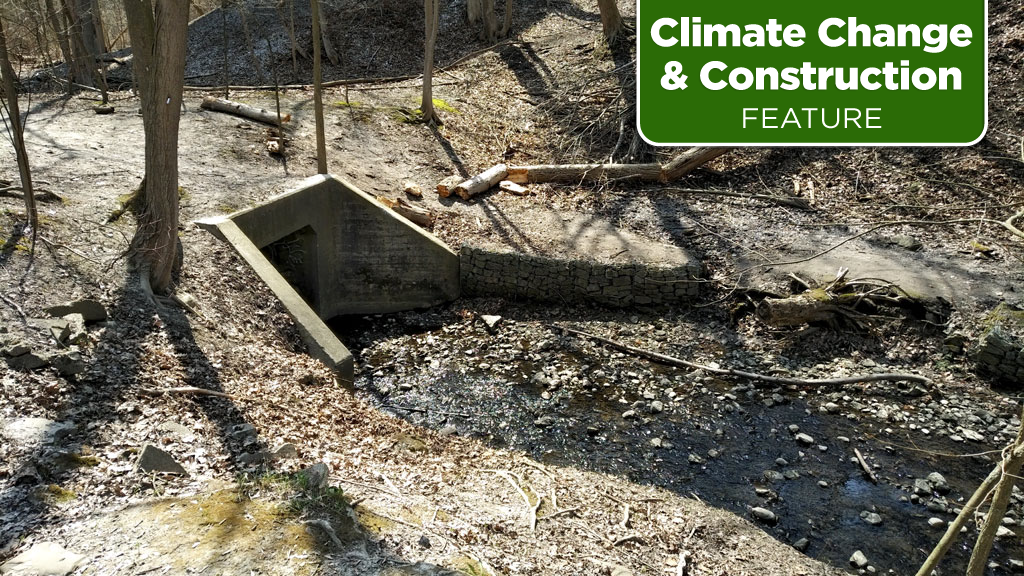 Now in its tenth year, the multi-phase, multi-year restoration of a severely degraded waterway in Toronto is entering its penultimate phase.

Earlier this winter, Dynex Construction Inc. began erecting fencing, installing silt socks and completing other work on the site so that restoration of another “leg” or section of Mud Creek could begin. .

Working under the supervision of a construction crew from the Toronto Region Conservation Authority, the contractor will undertake the channel/regrading and install approximately 850 tonnes of riprap for the erection of riprap walls and of rock vortex weirs, as well as the construction of a vegetated rock buttress along a 200-meter-long portion of the creek.

Materials should be trucked along Heath Street, a small side street, stored under a nearby bridge, then transported to the work area by small machinery along the Beltline Trail, a multi-use path parallel to the river, explains Divya, project manager of TRCA. Sasi.

A portion of the trail near the work area must be closed on weekdays to allow a safe route for deliveries, as well as maintenance of the staging and storage area.

“Realizing that this (the closure) is an inconvenience to nearby communities, we (the TRCA) consulted with the local councilor’s office and residents’ associations to gain buy-in for the trail closure plan and disseminate the information to local residents.

“We hope the inconvenience to the public will be short-lived and that soon we will all be able to enjoy the Beltline Trail again.”

Asked about some of the construction challenges, Sasi says that due to the creek’s poor fish habitat, Fisheries and Oceans Canada allows construction during the generally restricted in-stream work window between April and June.

Removals of trees and other vegetation have also taken place outside of key breeding times identified by Environment Canada, she says.

However, there are other constraints and deadlines to be respected. At the end of the summer, another division of the TRCA will complete work on a switchback trail just north of the construction site and will use the same staging and storage area.

And Heath Street, which is Building Materials Road, will be the site of a stormwater remediation the City of Toronto will begin in the fall, she said.

“So we have to be done by the end of the summer.”

The $2.2 million venture is actually part of a series of six Mud Creek restoration projects the authority has undertaken since 2012 in partnership with the Parks, Forestry and Recreation Division of the city ​​of Toronto. It’s the fifth.

“We expect the final scope to be implemented in 2023-24, pending confirmation of city funding.”

Located in the geographic center of Toronto and a tributary of the Don River, which empties into Lake Ontario, Mud Creek experiences frequent and significant stormwater flows, largely due to climate change.

In non-urbanized areas, heavy rains will seep into the ground. But in urbanized areas, it turns into rainwater that undermines the banks and accelerates erosion. Along Mud Creek, this stormwater also threatens the Beltline Trail and a number of private properties backing onto a ravine where the creek flows, she says.

And that was the catalyst for the project, the need for which was first recognized in 2003 in the City of Toronto’s Wet Weather Flow Management Master Plan.

“Mud Creek has been identified as a priority watercourse requiring repair work to address ongoing erosion and stormwater management issues.”

To address these issues and provide “comprehensive solutions” for Mud Creek, a Geomorphic Systems Master Plan was completed in 2012.

Its goals include improving the long-term stability of the channel and prolonging the deterioration of terrestrial habitats and local fish, “while simultaneously protecting city infrastructure and private property.”

Mud Creek is divided into six distinct reaches, each separated by culverts and having its own surface water characteristics. The restoration of these sections proceeded on the basis of a system of priorities described in the geomorphological plan, she says.

At this point, the TRCA has restored and repaired 860 meters of shoreline in the Mud Creek subwatershed. When the project is fully completed, the authority will have restored and stabilized 1,140 meters of the riverbank, she said.