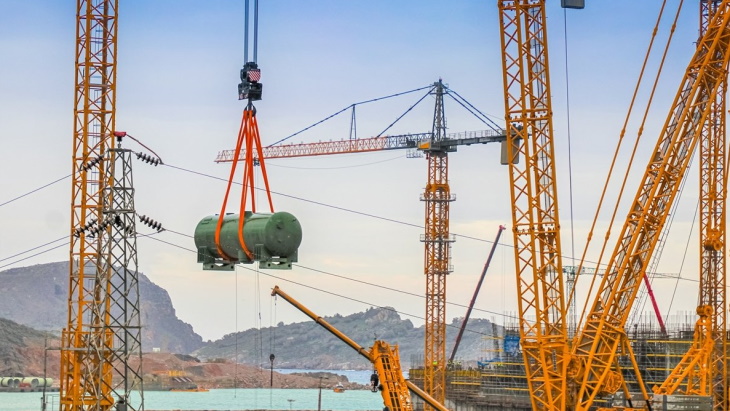 The installation of the main equipment of the reactor building of unit 1 of the Akkuyu nuclear power plant in Turkey has been completed. The VVER-1200, supplied by Russia, should start next year.

A steam generator is put in place using a crane at the Akkuyu site (Image: Akkuyu Nükleer)

In addition to the reactor pressure vessel – which was delivered to the site in November 2020 and installed last June – the four main circulation pumps, the four hydraulic accumulators of the emergency core cooling system (ECCS) and the four generators steam generators have now been installed in the reactor building, project company Akkuyu Nükleer AS announced.

The equipment, he noted, was installed using a heavy crawler crane using ‘open top’ technology, where the equipment is delivered from the open top of the cylindrical part of the building. of the reactor.

The Reactor Coolant Line (RCP) units were also delivered to the installation area. These were pre-assembled in a specially equipped workshop at the Akkuyu construction site.

“After installing the steam generators, we are close to the milestone of the construction of the first power unit which is the welding of the reactor coolant pipeline, in which the primary coolant must circulate,” said Sergey. Butckikh, First Deputy General Manager and Director of Nuclear Power Plant Construction at Akkuyu Nükleer.

“Builders are supposed to equip the so-called clean installation area. Cleanliness of the premises, air quality and humidity are ensured when welding the RCP, since the most stringent requirements are presented to the quality of the joints welded from the RCP.”

The preparation phase for the welding of the RCP connecting the main equipment of the reactor cooling system begins with the completion of the installation of the steam generators, Akkuyu Nükleer said. The CPR welding stage should start soon and should last about three months.

Rosatom is building four VVER-1200 reactors at Akkuyu, according to a so-called BOO (build-own-operate) model. Construction of the first unit began in 2018, with start-up scheduled for 2023. The 4,800 MWe plant is expected to meet around 10% of Turkey’s electricity needs.

Meta, Verizon, team up to study the metaverse