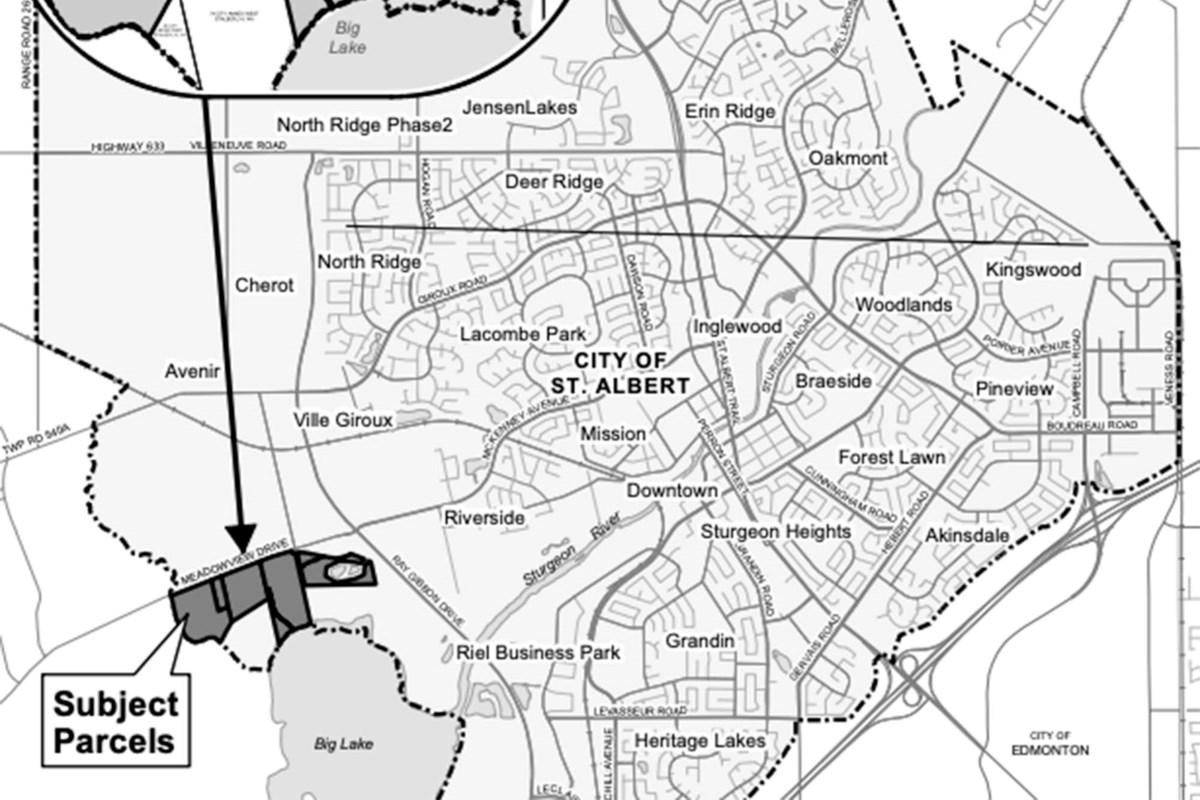 A member of the Big Lake Environment Support Society (BLESS) said he was “very disappointed” with the board committee’s recommendation.

A committee of council recommends that land near Big Lake remain open to industrial development, although a group aiming to save Big Lake says removing the option would help protect important natural areas in St. Albert.

Currently, St. Albert’s Municipal Development Plan (MDP) – a high-level document that outlines general land uses for areas within the city limits, as well as policies to guide the city as as it develops – designates the land directly south of Meadowview Drive and west of Ray Gibbon Drive as the employment area. On May 31, 2021, then Councilor Jacquie Hansen moved a motion to redesignate the land to Wide Open Space to protect more land near Big Lake.

Council voted at that time to gather more information on the implications of the proposed motion.

While employment zones delineate land for industrial and office use, large open spaces delineate land to be improved and protected for its natural features as the city develops. These areas are often ecologically sensitive and include the Sturgeon River and Carrot Creek corridors.

The city administration returned to council’s standing committee on community growth and infrastructure on Monday afternoon with a presentation outlining stakeholder and landowner engagement, after which the committee voted to drop the motion.

The board is due to vote on the committee’s recommendation at its next board meeting on June 20.

Tony Druett, a member of the Big Lake Environmental Support Society (BLESS), said Monday night that he was “very disappointed” with the board committee’s recommendation, but “not surprised.”

“The planning staff was pretty cooperative, but they clearly tried to come up with arguments not to make this change,” Druett said.

BLESS would like to see Meadowview Drive become a border road to the area the city has carved out for industrial development, rather than directly crossing it, Druett said.

He added that the area below Meadowview Drive above Big Lake is “precious” from an environmental perspective, noting that flocks of birds such as swans and pelicans, as well as a band other wild animals use the area.

“This particular part of the lake is one of the most sensitive nesting areas, far more so than most of the shores of the lake,” Druett said. “We really want to limit anything near that area.”

The land is suitable for conversion: town

Lyndsay Francis, St. Albert’s senior planner, told the council committee Monday afternoon that the land below Meadowview Drive is developable and not inside a flood line.

“The major open space policies within [the MDP policy] discuss some pretty specific terminology like natural features and flood prone areas that don’t apply to this area,” Francis said.

Within the current MDP, the shores of Big Lake are protected by about 500 meters of setback, Adryan Slaght, the city’s director of planning and development, told the committee.

Landowners the city consulted in the area also described land south of Meadowview Drive as the most cost-effective area to place future stormwater management facilities, Francis said. The designation of large open spaces is incompatible with this land use.

Also, if the CDM change comes to fruition, the city may have to buy the land, Francis said.

Estimates currently value the land at $21-27 million, not including park development and loss in future assessment of non-residential taxes.

While some internal city departments, such as the Parks and Recreation Department, Utilities and Planning Departments, have expressed concerns about the shift to wide open spaces, Francis said management of the City environment supported the change to wide open spaces for the same reasons as BLESS: that the land is near Big Lake and includes an important birding area.

Alberta Health Services (AHS) also supported the proposed amendment, Francis said, noting that maintaining and protecting natural areas has been shown to benefit the physical and mental well-being of those who use these. areas.

The next level of planning could present opportunities for protection

Slaght said the land below Meadowview Drive contains small stands of spruce that have been previously surveyed as having wildlife habitat value.

In response to a dumb question. Mike Killick on whether a developer would be able to cut down the trees, Kristina Peter, director of the planning division, said the city had a policy that environmentally sensitive areas should be protected.

The city recently initiated work on more detailed planning that includes the area below Meadowview Drive, a document that will be called the St. Albert West Area Structure Plan (ASP).

“Part of the ASP would establish regulations for these areas to be protected as well,” Peter said.

If council approves his committee’s recommendation, Druett said he still sees a way forward to protect the land with the St. Albert West ASP planning process.

“That’s where we’ll give feedback, and it might be an opportunity to come up with something that works,” Druett said.

Com. Natalie Joly said Monday evening that she voted to reverse the change to wide open spaces because the administration of the information provided was complete.

“The special designation [of major open spaces] is not intended for the type of use that was proposed,” Joly said, noting that the committee heard that the city was going to need stormwater management facilities in this area. “It’s really simple.”

The board committee voted unanimously to recommend reversing the change.

The committee’s recommendation will be presented to the board on June 20.

Total knee replacement market size worth $14.9 billion, globally, by 2030 at a CAGR of 6.2%: Verified Market Research®