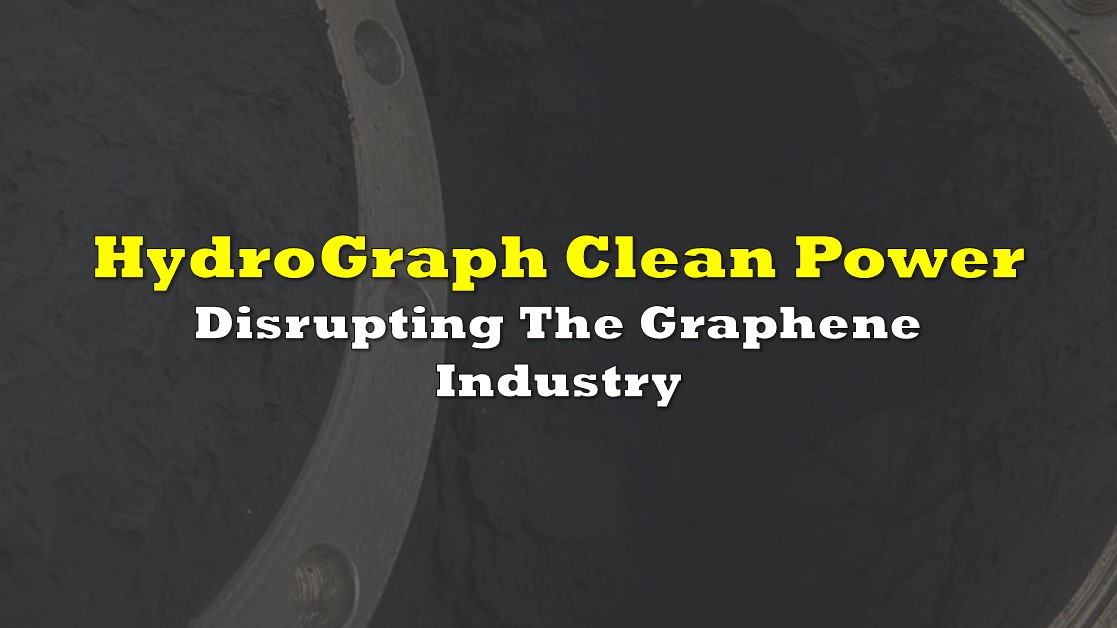 There are rare moments in history when investors are offered the opportunity to participate in the growth of ground-breaking technology emerging on the ground floor – as well as the company leading the charge. Graphene is that industry. And the confluence of advances in nanotechnology, chemistry, and manufacturing processes are positioning graphene to become an invaluable raw material in the manufacturing and functionality of an unlimited range of products in nearly every industry.

Most industries have been subjected to disruptive innovations that have changed them for the better, or have been relegated to the dustbin of history. Graphene has been around for years and was produced primarily by mining graphite, a capital-intensive and often environmentally destructive process. Although the end products are often referred to as “graphene”, they are usually thin strips of graphite.

Graphene is a “super-material”

Graphene is considered a “super-material” stronger than steel, harder than diamond and more conductive than copper. It is a two-dimensional, one-atom-thick sheet of hexagonally coordinated carbon atoms. The wonderful thing about graphene is that it can be infused into existing products and technologies. This improves and/or increases their performance characteristics and lifespan, providing users with economic and technological advantages over their competitors.

When added to existing products, graphene offers better electron mobility than silicon, superior electrical conductivity, and improved strength and flexibility. This makes the material ideal for clean energy technologies as it improves battery life, efficiency and longevity of solar panels.

HydroGraph and its revolutionary proprietary process

A company is about to disrupt the existing graphene industry. HydroGraph Clean Power Inc. (CSE: HG) has the rights to a proprietary process to manufacture Graphene with a 99.8% pure carbon content, with consistent and identical production quality. The purity of HydroGraph’s graphene has been verified by 5 separate laboratories and by the Graphene Council. It is the “green” technology that respects the environment par excellence. Currently, no company produces more than 50% graphene content and most produce less than 10%.

The Graphene Council has only awarded 4 companies worldwide the status of “verified graphene producer”, and one is Hydrograph. Of these four, only Hydrograph and Ceylon Graphene are in commercial production.

Ceylon Graphene currently produces 1.8 tonnes per year, while Hydrograph has just announced the expansion of its new commercial production cell and expect to have a production capacity of 10.0 tons per year by the end of the fourth quarter of 2022.

HydroGraph is currently in commercial production for potential customers in several addressable verticals. The new Hyperion graphene cell will put them on the right path to becoming one of the largest producers of graphene in the world. This title is currently held by NanoXplore (TSX: GRA) with 4,000 tons per year of production.

HydroGraph’s Hyperion system is a scalable, modular, customizable and cost-effective reactor unit. As such, it produces almost 100% pure carbon content graphene with minimal energy consumption, no solvents and no carbon emissions. Which makes it one of the cleanest graphene producers in the world.

The Hyperion system can be adapted to produce fractal and reactive graphene, the unique responsive shell graphene can be used to chemically combine better with other products. HydroGraph’s graphene can be easily incorporated into an unlimited variety of products including lubricants, energy storage anodes, lithium batteries, solar cells, supercapacitors and functional coatings. HydroGraph’s initial target markets are resins, lubricants and coatings, which can be used to dramatically improve product durability, strength and performance.

According to Grandview Research, the global coatings market, which was valued at US$83 billion in 2021, is is expected to grow at a CAGR of 3.5% through 2030. The US$128 billion lubricants industry in 2020 continue to grow at a CAGR of 3.7% until 2028, due to the growing demand for higher performance lubricants. The market for thermoplastic resins is expected to grow by 7.7% CAGR to reach US$40.06 billion by 2030, as they have a higher heat tolerance, greater fatigue resistance and are 30-40% lighter than aluminum. Vantage Market Research estimates Global Graphene Market to Reach $2.5 Billion by 2028.

The main reason for reaching out to these early markets is that HydroGraph CEO Mr. Stuart Jara has over 20 years of senior management experience and credibility in these industries. Jara understands the value proposition the company brings to enhance the many products produced by these industries. Its business strategy is to provide a steady stream of unique Graphene from HydroGraph to producers of a multitude of products, which in turn can enhance their product lines for their customers.

HydroGraph will not be in direct competition with its customers, but will be a valuable ally. Many companies in these industries are large multinational conglomerates with global reach, and they would essentially benefit from HydroGraph’s market penetration.

How does the HydroGraph Hyperion system work?

The Hyperion reactor was patented by Kansas State University and the rights granted to HydroGraph. Although the company’s current focus is bringing applications to market for customers, research and development is ongoing. An added benefit is that as new products are developed they may be patented by HydroGraph as its own intellectual property.

The nature of how the Hyperion reactor produces graphene is incredibly simple. A chamber is filled with a hydrocarbon and oxygen, the mixture is ignited with a small spark and graphene is formed. Once graphene is formed, syngas, which is a mixture of hydrogen and carbon monoxide, is left behind as a byproduct. This, in turn, can be used to produce both hydrogen and as a source material for many other organic chemicals.

The company currently has a 13,000 square foot manufacturing facility in Manhattan, Kansas near Kansas State University. A unique feature of HydroGraph’s low-cap Hyperion Systems is that they have the ability to build processing plants close to their customers’ sites, to provide them with a steady supply of graphene just in time. The reactors are modular and scalable, i.e. they can be implemented to meet customer volume requirements by installing the required number of reactors needed without the need for sophisticated re-engineering.

The graphene industry is in its infancy. HydroGraph is well positioned to become an industry leader due to its unique low-cost production process, which is expected to deliver high profit margins by delivering the highest quality graphene currently available. The product has an almost endless amount of potential applications – and in almost every industry.

The company’s management team has the experience and industry connections to break into the market. Initially, they focus on familiar industries, which can lead to rapid revenue growth and almost instant profitability once sales begin.

HydroGraph Clean Power Inc. has 154.9 million shares outstanding and a market cap of just $21.7 million. The company appears to have a competitive advantage within the industry, as it is the only producer of nearly pure graphene. They are also environmentally friendly, ticking all the ESG (environmental, social and governance) boxes that many consumers and investors are concerned about.

HydroGraph represents a potential ground floor opportunity for investors and shareholders in a company that can be positioned now to become an industry leader. And the graphene industry is likely to experience rapid exponential growth over the next ten years as many industries improve their products by incorporating graphene into them.