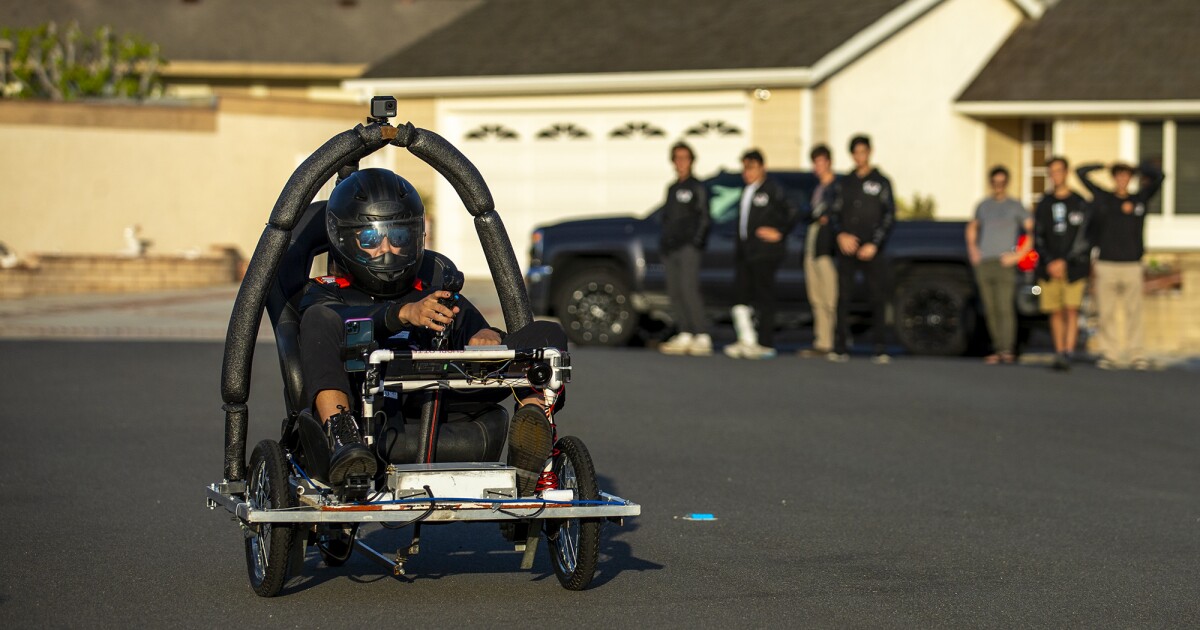 The formula is uniform for each group and quite simple: 10 million, divided by (watt-hours multiplied by the total number of seconds).

Twenty-six teams from high schools in Orange County and Long Beach were tasked with building the most efficient electric car possible. Their cars were inspected this past weekend, and it all preceded race day Saturday morning at UC Irvine’s 70 parking lot.

The high school race, in its 12th year, was canceled in 2019-20 due to the coronavirus pandemic. Last year, teams were judged solely on their design element and Estancia High took home the top prize.

But the teams will be back on the track this year for the competition, originally created by UC Irvine engineering professor Michael McCarthy. Senior Vital Link program director Neda Arab said Estancia will enter a car again this year, while teams from Huntington Beach and Ocean View High Schools are also among the local competitors.

Vital Link, which has helped the race since its inception, is a Tustin-based nonprofit organization dedicated to providing students with experiential learning opportunities.

“We love that the kids are so passionate,” Arab said. “That’s why it’s so important, because we want to provide programs where kids are encouraged to pursue their passions. We knew we had to bring this contest back as soon as we got the go-ahead from districts and schools to hold in-person events. So this spring, we brought it back.

As you can imagine, the preparations for the race went very smoothly. The Huntington Beach group, advised by HBHS physics professor Ray Egan, has been meeting since December in junior Lucas Ruebsamen’s family garage.

About half of the entrants opted to use a standard Formula 24 car design, but the Huntington Beach team decided to do their own thing. They are also divided into three distinct units: engineering, business administration and documentation/testing.

Lucas did much of the software coding for the project. The group of around 10 students also used multiple 3D printers for some on-board equipment, including the joystick used to drive the car. Lucas’ father Gene, a former engineer, also helped the children with their designs and calculations.

The entrance to Huntington Beach High will be led by Kirin Kunkle, another junior. Industrial Metal Supply donated a fair amount of metal for the project, said Kirin, who took on the task of welding most of the aluminum together.

Lucas and Kirin are respectively president and vice president of the 3D printing club HBHS.

Their car is relatively light compared to the competition at around 120 pounds, Kirin said. He hopes it will be the best performer in the four races.

The project went through at least two more iterations before settling on the current design, Lucas said. One involved taking apart a wooden fence and putting together what he called a “really bad” frame.

But the students learned from their trial and error.

“If you look at most competitors, they’re racing with one motor driver,” said engineering student Dylan Zazueta. “They use one axle, usually two wheels, or they will have one wheel drive. We actually have two separate motor drivers, with two separate chain links as well. We try to put a different ingenuity into the competition.

Costa Mesa residents Phillip Chipman and Robert Smith serve as judges for the event. Each has been involved for years; Chipman once won a previous version of the contest that was open to all vehicle types.

Changing the rules to electric-only vehicles and involving high school students has also been rewarding for Chipman, a retired engineer.

“I like to see what students come up with and help them with their engineering skills,” he said. “Since racing is all about efficiency, you don’t want to go top speed because you’re burning all your fuel. Well, in this case, all your electricity, kilowatt hours and energy. balance. How much energy do I use to win, to get the maximum points?”

The answer will be determined Saturday morning.

It all comes back to the formula.

Support our coverage by becoming a digital subscriber.