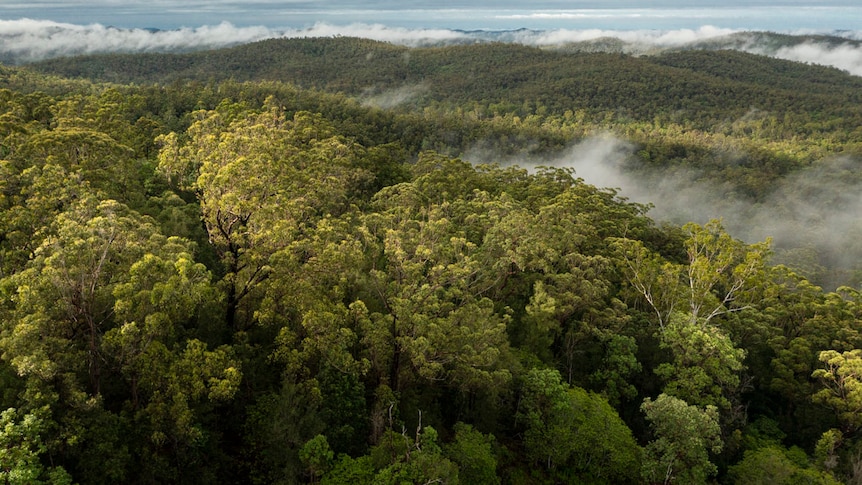 There are calls for the Queensland Government to stop approving large foreign-owned wind farm developments in Far North Queensland, amid fears the area could become a ‘brownfield’.

South Korean wind and solar energy developer Epuron wants to build a development of 94 wind turbines that will border the World Heritage-listed rainforest west of Cairns.

Assessment work is already underway for the site which will be located on two pastoral properties near Tully Falls National Park, which is part of the Wet Tropics World Heritage Area.

More than 1,200 hectares of land will be cleared to make way for wind turbines over 200 meters high as part of the Chalumbin wind farm.

The wind was expected to spread from an area west of Ingham, north to west of Cairns.

Kennedy MP Bob Katter said the development would threaten birds and several vulnerable species in the area, including the great glider.

“Every North Queenslander has to answer these questions: do you want your natural wonderland to turn into a brownfield,” Mr Katter said.

“I’m not against all wind farms. In Hughenden, you can build one 1,000 meters up where there are no trees or abundant birds.

“The wind is also much more reliable there. It’s a great idea there.”

The proposed Chalumbin Wind Farm development will be built near the mountain village of Ravenshoe, if approved.

The French company Neoen is already building the Kaban Green Power Hub in the region.

Clearing is already underway for this project, which will include a wind farm consisting of 28 turbines, each also over 200 meters high.

There is also the Desailly Renewable Energy Park Project, owned by Irish company DP Energy and in Walkamin, about 40 minutes drive away, the Thai-owned Mt Emerald Wind Farm has been operating for several years.

“These turbines will be as tall as some of the tallest buildings in Australia at 226 metres,” Ms Emms said.

“We are looking at up to 800 cubic meters of concrete. This will accelerate fossil fuels [consumption]mining.

Dozens of residents protested the project outside one of the recent sessions, including traditional owner Tom Gertz.

“They see this area as wasteland, but it’s not, it’s far from it,” Gertz said.

“I am however very devastated by the way this government is pushing this. This area is culturally very important.”

Herberton resident Peta Weaver was also present at the briefing and said that while she had concerns about the number of wind farms being built in the area, Australia’s reliance on coal had to end.

“I know there is going to be a loss of species due to climate change and I think that would be a much worse scenario than the loss of species through these types of renewable energy developments,” Ms. Weaver.

Epuron said Australia’s Department of Agriculture, Water and the Environment has determined that it will assess the Chalumbin project under the Environment Protection and Biodiversity Conservation Act.

Development chief executive Anthony Russo said less than 4% of the site would be cleared and the project would power 350,000 homes.

“We followed a very rigorous process to design the project within the constraints and opportunities of the site,” said Russo.

“The original proposal involved 200 wind turbines, and based on the information received not only through the ecological surveys, but also the cultural heritage surveys, we reduced [that] to 94 wind turbines.

“Ultimately, as we see in Queensland and Australia, we have certain government commitments to 50% renewable energy targets by 2030.”

“It has to accumulate – if it accumulates, it is allowed to continue,” he said.