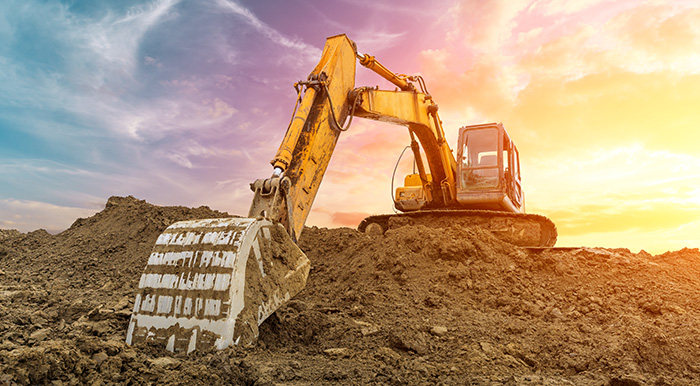 In cranes, pavers, earth movers and other equipment used on construction sites, integrated CAN networks are used for many purposes. CANopen and J1939 are the most applied upper layer protocols. The next step is the migration to CANopen FD and J1939-22.

The full article is published in the September issue of CAN Newsletter 2022 magazine. This is just an excerpt.

In 1994, CAN in Automation (CiA) already created the special interest group (SIG) for mobile applications. It was chaired by Alfons Horn working with Moba. The CiA working group has started developing a CAN Application Layer (CiA 200 series) communication profile for construction machinery. When the CANopen application layer and the communication profile were handed over to CiA, the group decided to go this route. Today, Moba offers CANopen products for leveling and quality control of pavers, compactors and milling machines.

At the same time, in the mid-1990s, American earth-moving machinery manufacturers adapted the J1939 to control diesel engines. It has taken some time to introduce CAN-based global networks in construction machinery and equipment, as this industry is conservative in adapting new technologies. Good things come to those who wait. In the late 1990s, Professor Wolfgang Poppy of the Otto-von-Guericke-Universität Magdeburg (Germany) pioneered the development of a prototype excavator controlled by CANopen networks. A few years later, many German construction machinery suppliers used CANopen in their products. In the meantime, many other European companies have implemented CANopen in their machines. They are supported by host controller manufacturers (eg Epec, Intercontrol, ifm, Moba and STW) as well as sensor and actuator suppliers. The advantages are the standardized interfaces for encoders (CiA 406), inclinometers (CiA 410), modular I/O devices (CiA 401), etc. Products conforming to these CiA profiles are interoperable with CANopen host controllers. However, the interchangeability of such devices is limited to mandatory functions.

Modern paving machines require multiple sensors. This includes in particular sensors for controlling the leveling of road construction machinery. Moba is one of the first to provide such sensors with CANopen connectivity. Apparently Chinese companies copied them. Some of these copies looked like the box to the originals, but the function and quality was different. Paving roads and highways as well as runways requires sophisticated asphalt temperature control. This has also been achieved with CANopen connectable sensors. In addition, CANopen networks are used in on-board lifting equipment. Hirschmann (today: Wika) was an early adopter of CANopen Safety (EN 50325-5) for overload protection purposes in container, gantry, lattice boom, telescopic and other cranes . For this type of applications, safe and functional sensors are necessary. CANopen Safety was developed at the turn of the millennium, originally released as CiA 304 specification.

At Hannover Messe 2022, TWK exhibited its rotary encoders. They provide CANopen or CANopen Safety connectivity. The latest model of ABN encoder has a resolution that divides the 360° circle into more than 4 million steps, which means 22 bit resolution. That’s impressive with better than ±10 arc seconds, or less than ±0.003°. Precise position and speed measurements up to 10000 1/min are thus possible. These values ​​are obtained by scanning an optical code disc. Equipped with the CANopen or CANopen Safety interface, the encoder can be used for safety-related applications. The requirements for SIL 2 (safety integrity level) according to IEC 61508 are fulfilled. Moba has developed the MSS Slope CANopen sensor family, which has been certified EN ISO 13849 by TÜV Nord. These sensors support CiA 301.

The next step: Migrating to CAN FD

Some construction and earth-moving vehicles – nicknamed “wheeled or tracked machines” – use multiple CAN-based networks. Some of them still use higher layer proprietary protocols. But most use CANopen or J1939. In motorization, the J1939 dominates. CANopen is often used in machine parts. If CAN-based networks do not provide sufficient bandwidth, just another network segment is introduced. This is why many host controllers provide multiple CAN ports. In some applications, the separation of functions is not due to bus loading, but to the functional separation provided by different development teams or subsystem vendors. If bus loading is an issue, CAN FD can help. The CAN protocol of this second generation is now available in most microcontrollers. CAN HS (high speed) transceivers and transceivers with signal enhancement capability (called SIC transceiver) are available from several chip manufacturers. But there is an obstacle to migrating to CAN FD: there is no specification for the design of the network system. CiA will fill the void. The non-profit association is seeking an academic partner to develop design recommendations for large CAN FD networks. The research results should be usable for CANopen FD as well as J1939-22 (CAN FD based transport and application layer). J1939-22 adopted the multi-PDU (Protocol Data Unit) concept, originally introduced in the CiA 602-2 specification (withdrawn after J1939-22 was released).

In 2003, CiA released the CANopen Application Profile for Sensor Systems in Road Construction and Earth-Moving Machinery (CiA 415 version 1.0.0). The predecessor to this specification was jointly developed by the Osyris consortium (open system for road information support) (completed) and the European Asphalt Pavement Association (EAPA, www.eapa.org). Version 2.2.0 of CiA 415 was released in April 2009. This application profile specifies communication interfaces for sensors and a sensor controller of road construction and earth-moving machinery such as pavers, rollers, graders, dozers, mulchers, heaters and trucks.

Profile-compliant sensors require a sensor controller (CANopen application controller and manager) that supports CANopen network auto-configuration. During startup, the Sensor Controller scans the entire network for available sensors. Next, the number of process data inputs provided by each sensor is read and checked using a plausibility test. If the number is valid, each process data entry is read. Then the sensor controller creates the necessary TPDOs for each device and uploads them to the sensors via SDO. The PDO mapping parameters are configured first, followed by the PDO communication parameters. The same procedure is repeated for the required process data, the RPDOs of each sensor being created. After this process, the sensor controller switches the affected devices to the NMT operating state and tests whether the established PDO connections are working correctly.

Trying to keep the roof down in Cancer Alley Louisiana