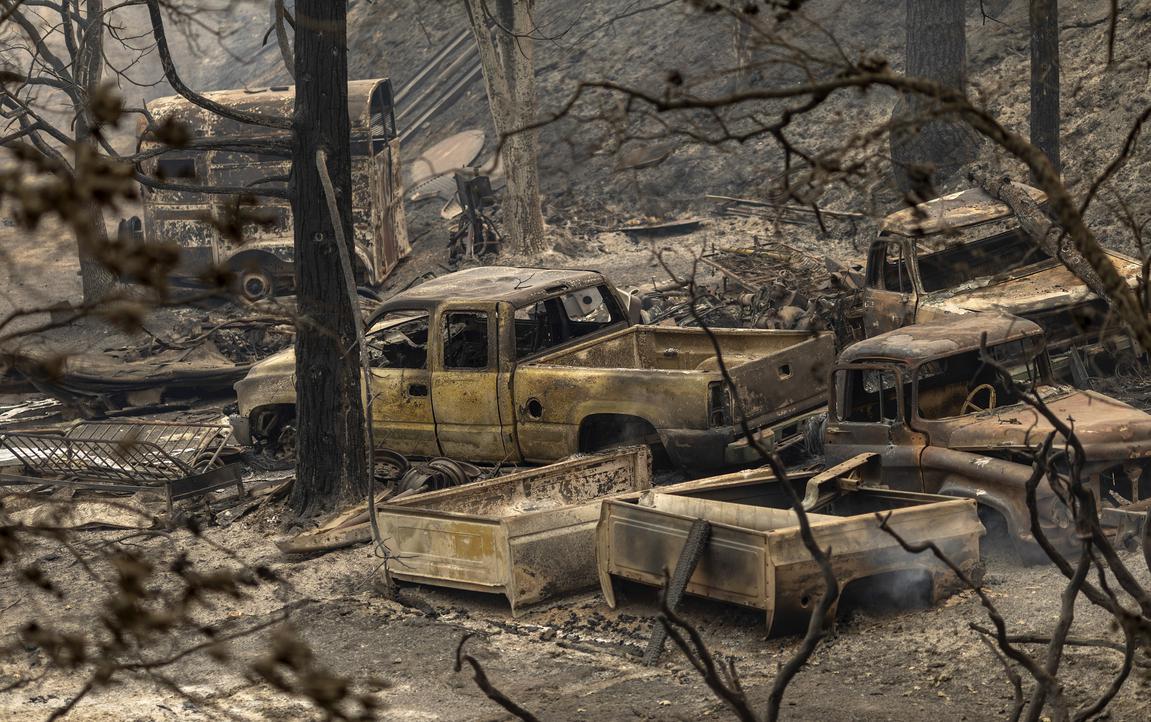 A wildfire has wiped out our California town. A slow trickle of death has been stalking us ever since

Not a single person was killed when the Creek Fire wiped out my neighborhood of Pine Ridge in 2020. As the fire ravaged our community in Fresno County, 66 of the 88 homes in our territory were destroyed, but no firefighters , law enforcement officer or civilian were lost. Everyone evacuated safely.

Since the end of the fire, however, the story has been different.

Pine Ridge was a small, demographically older community. Our deceased neighbors, though not young, were no less strong. Life is not so easy when you have to clear snow from the roads in winter that you develop and maintain in summer. No matter what heavy equipment one neighbor or another might have, we all had to lean on each other to get through – and we did.

In total, we have seen a series of eight deaths since the flames went out. In all of these post-fire deaths, relocation stress syndrome or “transfer trauma” likely figured prominently – both for evacuees whose homes were destroyed and for those who still had homes to return to. .

Having our homes burn down in the middle of a pandemic was not something any of us had anticipated. When it happened, it was a brace that stunned us all, no matter our age or health. In the two most recent deaths, complications from COVID-19 were also heavily involved – a sadness that has further saddened our community.

In the wildfire and the pandemic, the politicization of science and loss have played an all too visible role.

It was all under a false sense of security. When our neighborhood was evacuated on September 6, none of us thought our homes would burn. Our area had no historical record of heavy wood fires. We had done everything the California Department of Forestry and Fire Protection and local building codes required us to do.

My wife and I had a 100 foot defensible space around our house, sheds and pit house, which was also literally inside a shaded fuel cut. We had steel roofing on all of our structures. Moreover, the house was not clad in wood, but in fiber cement planks. Like our neighbours, we had cut down the many standing dead trees killed by beetles and drought. We then had them transported by loggers, a clearing of the forest which probably made us even safer against fires.

But the Creek Fire took it all anyway.

Until the scientific facts surrounding both the trees and forests are maintained – down to the history of past fuel loads and modeling of future climate change disasters is taken into account – building and living in the mountains of California will continue to be a very bad bet, no matter what the interests of real estate, construction and other chambers of commerce would have us believe.

A similar “you bet your life” dynamic has prevailed around the COVID-19 pandemic in our region. The vast majority of Pine Ridge residents were very conservative and long inclined to mistrust the government. Many were anti-mask and a few were anti-vax. Like many other Americans, they readily believed what they heard from their pastors, priests, politicians, social and mainstream media personalities, and experts — even when those sources downplayed the seriousness of COVID and denied the effectiveness of vaccines. and masks – while simultaneously playing on the “cures” of junk science.

The two neighbors we recently lost to COVID came from different households. One was 67, a father, grandfather, ex-Navy SEAL and lifelong heavy equipment operator with phenomenal skills. The other was a vibrant 81-year-old Irish woman who immigrated to the United States six decades ago and then not only raised her six children with her husband, but also fostered and adopted many others. .

Their deaths were, to varying degrees, obscured by the fog of the plague. Were they fully vaccinated? No. Hard to learn the finer details, though. No one wants to ask the question or talk about it because even in our community, which has clung to tragedy after tragedy, that would be too much.

COVID and our responses have divided us. Asking or talking about COVID with families who have lost loved ones to the disease would be like not just trying to score political points, but even blaming families for the deaths. And who on Earth knows the truth about that?

Suffice to say that looking from the outside, it seemed to us that our two COVID victims should have had many more years ahead of them.


Even now, politics will not let them rest in peace. Of those at one end of the spectrum, we are told that, well, our neighbors had been slow to get fully vaccinated and therefore somehow “deserved” to die. Many on the other end of the spectrum refuse to believe that COVID has even been a major player in deaths. They must have died from “other” causes – comorbid frailties – certainly not from the virus, because (according to their opinion leaders) the lethality of SARS-CoV-2 could only be over-reported hype and a hoax.

The complex truths about the life and death of my neighbors are denied by both ends of the political spectrum. They prayed. They hoped against all hope. As my own mother did too, in January 2021, in Cincinnati, when she died of respiratory failure related to COVID.

She died a few months before before vaccines became widely available.

The greatest tragedy is that as I write this, more than 200,000 Americans have died of COVID since the deployment of the vaccine that could have saved my mother’s life. The overwhelming majority of them were not vaccinated, for whatever reason.

Now, with the spread of the omicron variant across the world, even among the vaccinated, there is talk of breakthrough infections, and the hope that even if new variants make their way through our vaccine defenses, the results will be less severe than previous incarnations of the disease.

Even in our vaccinated security, more of us too may one day find ourselves saying about a future variant what we at Pine Ridge have previously said about the Creek Fire: “Why us? We did everything we were supposed to do, but disaster took it all away.

We must stop overestimating the safety of living in the mountains in times of climate crisis and forest fuel overload. We need to stop underestimating the dangers of living in the age of COVID. We must have the courage to face ever more desperate truths about pandemics spreading like wildfires and wildfires spreading like pandemics. Any hope based on a false sense of security will only make things worse.

Howard Hendrix served as president of the Highway 168 Fire Safe Council and is a longtime firefighter with the Pine Ridge Volunteer Fire Department in Fresno County.